Jan 24, 2014  |  Posted by PokerSnowie  |  1
This article will present quite an advanced strategic Poker concept called 'floating'. 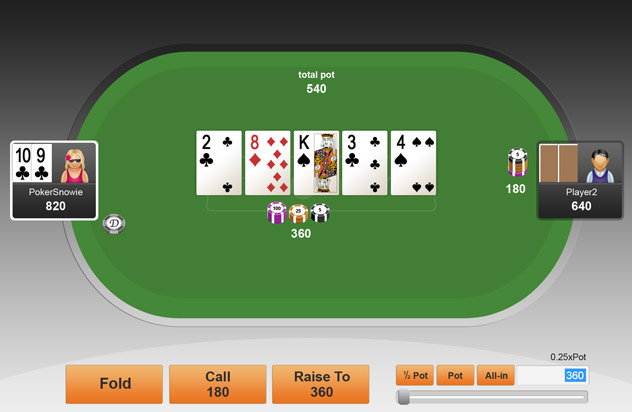 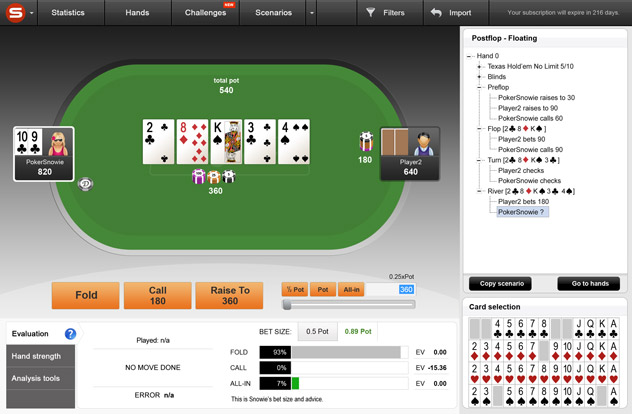 Is PokerSnowie nuts? Or is there a strong, hidden strategy behind PokerSnowie's moves? In fact, the strategy cannot be seen by just following one game. It is mandatory to look at the percentages for each move and the overall strategy with the whole hand range.
So let's look at each move again.
On the flop, the opponent made a continuation bet, which doesn't necessarily mean a strong hand. PokerSnowie needs to find a calling range that is big enough. Calling with the minimum of a pair would leave PokerSnowie folding most of the time, and invite the opponent to run over PokerSnowie. PokerSnowie's hand range shows a probability for 'High card' of 49%

Folding such a big portion of the hand range against a half-pot continuation bet sitting in position is way too high. Therefore PokerSnowie has to call with weaker hands as well. As there are no draws possible on this flop, the best hands to call are the ones offering backdoor flushes and backdoor straights. Tc9c is finally one of the best non-pair hands available!

This type of play on the flop is called 'floating'. You float with a weak hand, with two ways of winning: you may hit a draw on the turn and complete it on the river. Or, (and this is actually the main variant) you hope that the opponent shows weakness and you win by bluffing him out on the turn or on the river.
On the turn, the opponent slowed down and just checked. This is indeed a great spot for bluffing, but PokerSnowie does so only 21% of the time with Tc9c. The reason is that PokerSnowie has trained against extremely strong opponents, who know very well that PokerSnowie might be floating on the flop. So those opponents with very strong hands would sometimes check on the turn to induce bluffs. That is why bluffing all the time here is not the right play.
On the river, PokerSnowie folded, but would actually bluff-raise all-in 7% of the time! This bluff-raise is certainly well covered with value-raises, like a straight (holding A5) and trips.

So even though the actual example game showed a very passive PokerSnowie, the underlying strategy is quite a bit more aggressive. The concept of floating is very advanced and only works with the right play on the later streets. Floating on the flop means being willing to bluff on the turn and to bluff-raise all-in on the river!
PokerSnowie's training algorithm is designed so that all streets are constantly improving in parallel. In the beginning of the training, floating was probably not a profitable play, because the follow-up strategy had not yet evolved. Only with decent play on the turn and on the river, did floating on the flop become another weapon in PokerSnowie's arsenal.

Me and my friends have been using true RNG's to randomize our play in many spots. It's great to see a computer algorithm finding similar nuances with optimal play. Interested as to how it derives these frequencies. Thanks for the program.