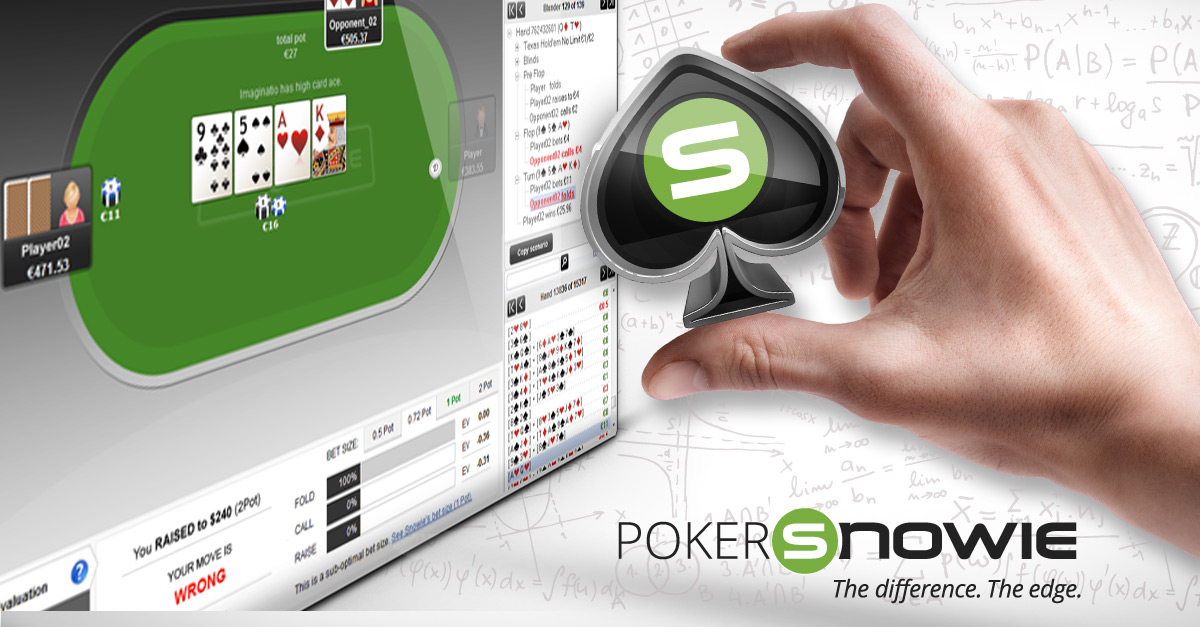 This article explores how to construct a betting range that is well balanced between value hands and bluffs, and shows how PokerSnowie compares to the theory.

The optimal bluffing frequency is easy to calculate on one street. Suppose two opponents are on the river, hero can have the nuts or be bluffing, and villain has a bluff catcher.

Let’s call the optimal bluffing frequency F. By definition, F should make villain indifferent to calling or folding. If hero bets $X into a pot of $Y, villain is risking $X to win $(X+Y) and therefore:

For examples if hero bets:

I won’t do the math here since they are much heavier but hero is able to add the same proportion of bluffs on each previous street.

For example, if hero is betting pot on flop, turn and river and his range consists of hands with 100% or 0% equity on each street, his optimal bluffing frequency would be :

The power of having the nuts allows hero to bluff with loosing hands. But once he is called on one street he should of course give up with some on the next street.

In practice, situations are not so cut and dried:

The button opens to $30, hero 3Bets from the BB and the button calls. 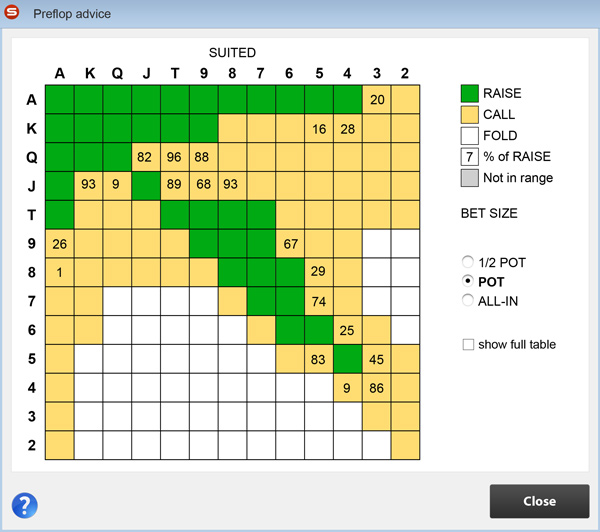 Hero should not yet polarize his range. But in order to hit any flops, hero should 3bet hands as strong as AA and as weak as 53s.

Once he called, villain capped his range. If villain follows Pre Flop Advisor, its range won’t contains TT+ or AK. 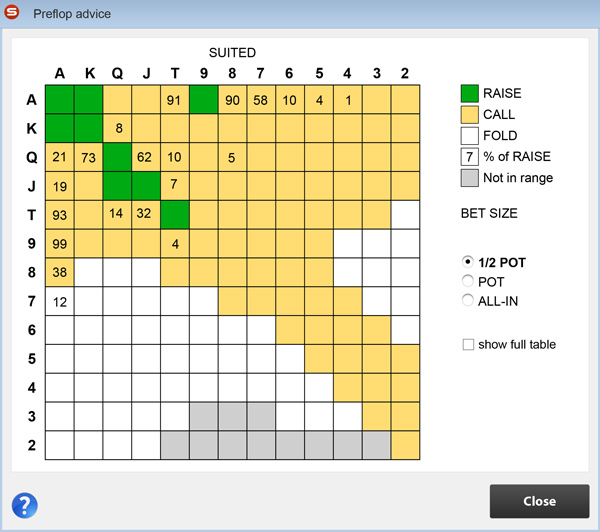 This is a good flop for hero. Villain has some 9 but very few 2 in his range. Most of the regulars would have only A2s and 22; PokerSnowie would have some more combos but not many.

From the big blind PokerSnowie would Cbet with 80% of his range.

We can see how reality is much more complex than theory. Of course at that point, a bet with 99 is clearly for value and a bet with Tc7c is a bluff. But PokerSnowie is also betting with AdKd for thin value; this hand is ahead of villain’s bluff catching range. It is also a bet for protection. If he was betting only the nuts or air, he would not be able to bet very often. 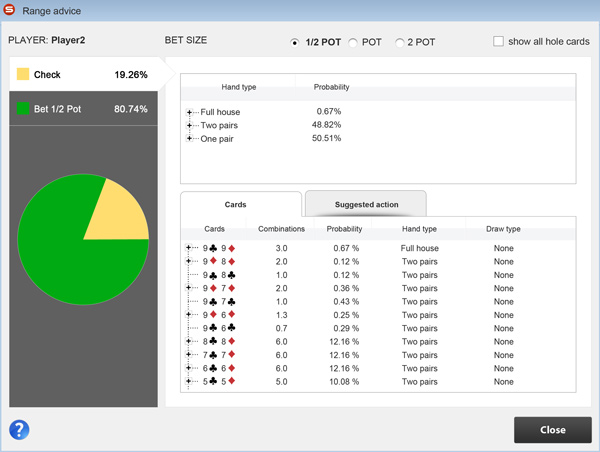 When villain calls he might slow play with quads or a full house, bluff catch with a pair or float with Td7d with the hope to improve or to bluff hero on a later street.

In villain’s shoes, PokerSnowie would still raise around 12% despite the super dry texture, with A2’s for value and with some bluffs.

The board is still very dry with no flush draw possible.

On the turn hero’s betting range is getting more and more polarized. He is betting less than 50% of the hands he had bet the flop with. 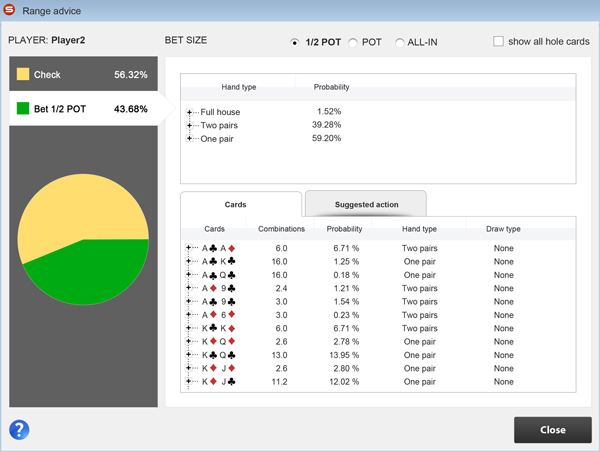 Since hero’s range is now very polarized, villain should not raise anymore. But in position he should still go to the river with 86% of his turn range. Like on the flop, villain’s range is including slow plays, floats and pure bluff catchers.

Hero was bluffing and rivered a straight to value cut himself. But unless he would have caught a pair, PokerSnowie would have bluffed with that hand since 5 high has zero chance to win at show down.

If hero was in a pure polarized range, with hands having 0% or 100%, we should having the following bluff frequency F: 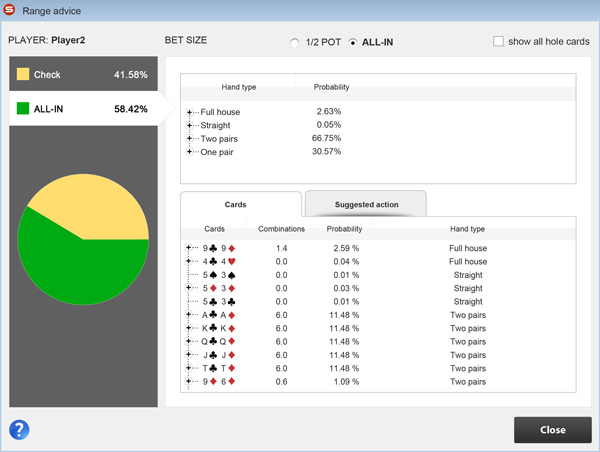 In that situation PokerSnowie’s bluff frequency is 30.57%, which is extremely close to the optimal 32%.

On the turn, according to PokerSnowie, hero should value bet pairs of 9 and go broke on a shove from villain. That’s only 40% of hero’s betting range. The difference comes from the fact that PokerSnowie’s range isn’t 100% polarized. Hero should still bet some combos of AK, AQ or Broadways for protection and very thin value. It is important to bet sometimes with those hands to be able to represent top pair if an over card falls on the river.

For the same reasons on the flop, in hero’s shoes, PokerSnowie would call a shove with “only” 30% of its range.

In theory: with a pure polarized model

In the real world: PokerSnowie’s bluff to value ratio

It is important to note that PokerSnowie’s checking range is well defended. On any street, a check is not a white flag allowing villain to take the pot with a bet, since hero would have hands as strong as a full house in his checking range.

Hopefully this example has demonstrated yet again that PokerSnowie has developed advanced strategies through its neural network training model and how the analytical tools of PokerCoach help understand and apply PokerSnowie’s advance knowledge to your own game.

I look forward to your feedback in the comments.

The EV lost from betting AQ/AK on turn cannot possibly be outweighed by the benefit gained of being able to rep over cards on future streets. On this board there just aren't enough worse hands that call on turn given how dry the board is relative to bow often we could improve to the best hand. I'm very interested on how poker snowie feels on this issue.

Thanks for your comment. Actually, I tend to agree with you. In the article, Sharp looked at the showdown strength, which is greater than 1.0, but the betting strength is only 0.85. So betting AK is NOT for thin value. Sometimes the opponent calls with a worse hand, but mainly you are betting as a semi-bluff, hoping that the opponent folds. Johannes.