PokerSnowie Mobile: The thinking behind our direction

With the release of PokerSnowie Mobile iOS version 1.2.2, we would like to take the opportunity to share some thoughts about our mobile-oriented development.

As you know we have started our process of developing full featured apps for smartphones, both Android and iOS based. Our idea since the beginning was to start step by step and decide on an ongoing basis which features to develop and where to aim. The reasons behind this choice were twofold: 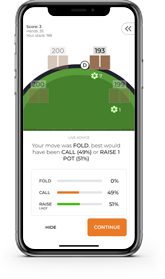 So we decided to start with something very simple, which was just a heads up version where the starting amount is reset at the beginning of each hand, to which we gradually add more features, like the ability to play 5-max tables, set the initial stake, define the extra buttons that the users would like to use, and play ante games.

But we are well aware that so far the real value of our app has not yet kicked in. What makes PokerSnowie unique is in fact its solid AI, and this is the direction where all our customers want us to go: having features that, based on the AI, let people learn how to play, while having fun in a risk-free environment.

That’s why we think that this latest release marks the “useful” phase of our app development. We have indeed introduced the Live Advice feature, which can be turned on or off at the beginning of each hand and gives you real time feedback during play, every time that PokerSnowie thinks you made a mistake or you could have made a better play from a GTO perspective.

Among the available information you will see a statement suggesting which play would have been better and the evaluation triplet that displays which strategy PokerSnowie suggests in these situations.

We know that we are still far from the potential that is behind a PokerSnowie mobile application, but we believe that this is a very important and interesting step. This update is now available for iOS, while for Android we still need to wait a few weeks, even though a beta version of the Live Advice is already available.

There is still much to do. This is also the moment where user feedback is critically important. Since we have so many ideas and so many things that we could do, we’d love to listen and be able to make informed decisions about which direction to take.

Among various ideas on the table at the moment we could mention a few...

We could create some sessions-oriented games. At the moment, when you start playing, you don’t have a predefined number of hands to play and all players’ stacks are reset at the beginning of the hands. It would probably be nice from a user perspective, in order to increase the feeling of a real challenge, to define different types of sessions, including freezeout, and let the users decide how the rebuy logic should work.

Another important point is the score at the end of a session. Right now it’s the chips won or lost during these sessions. But everyone who plays poker knows that the chips are meaningless, especially in super short sessions. A better scoring system should take into account how the user actually played with respect to what PokerSnowie would consider the best play.

Having the ability to see on your desktop application (Windows for now… but just so you know, we are working on a Mac version!) some selected situations that you encountered during your mobile sessions would also be great. This would allow you to learn more in depth from specific aspects of the game that you encountered while having fun with PokerSnowie.

Creating a more social contest where people could compete with each other would also be interesting for everyone. What if the objective of the contest is not to win more chips, but is in fact a mix of winning chips and playing well?

Anyone who knows PokerSnowie also knows that there are other very interesting features in the PokerSnowie desktop version, like the ability to edit a situation (scenario) and get PokerSnowie evaluation, as well as hand ranges and range advice.

The possibilities are endless. With this rather long article our objective was to share with everyone where we are going with our mobile development and at the same time we are inviting anyone who would like to share his/her thoughts to email us at support@pokersnowie.com with any ideas which we will be happy to consider.

Thank you for taking the time to read this article :-)