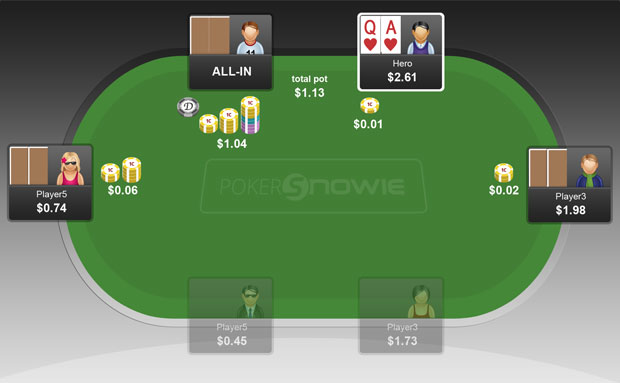 The hand: hero folded, but the cut off called with pocket sevens and after the board ran 3AJQ8, the button won the pot.

In this example, the cut off opened for 3 blinds and the button shoved 52 blinds. What should hero do in the small blind with AhQh?

Evaluation from the old AI = all in

Evaluation from the new AI = Fold

Our first step is to calculate the pot odds.

The second step is to determine our equity.

For the call to be correct, the button has to at least shove the top 7.4% of the hands (88+, ATs+, AJo+ KQs). Then AQs is winning on average 47.8%. I don’t think the 3bettor range is large enough to justify a call in the first place. I haven’t seen many players moving all in on a 3bet for 52 blinds with ace ten or ace jack. Regardless of this, the old AI over evaluates the equity of AQs, stating an all in would win 17.37 BB on average.

Lastly, we make our decision based on the alternatives.

Pushing is a big blunder according to the new AI. AQs is far from crushing the button range, it’s probably behind and the risks are high to face an over call from a better hand. Additionally, in this situation we cannot ignore the players left to act. Since he had opened the pot, the cut off doesn’t have a random hand anymore. Therefore the risks of being over called are much higher, than in the previous positions with players left to act. Against two players all in, he will probably call with the perfect range against our hand: never folding better (Ace King), and never calling with worst (Ace Jack). AQs would have well performed against those two hands but is doing too poorly against villain’s ranges.

Regarding this type of scenario the old AI was not performing so well. There were often incoherencies in its evaluations between different lines. For example, in the last situation the old AI was evaluating a call would lose 2.60 blinds and a push would win 17.37 blinds in equity. This just can’t be since both lines are almost always leading to the same result. The only difference being when he calls, hero can still fold if the player in the big blind goes all in. I haven’t seen any of those leaks with the new AI evaluations and the decisions it recommends, seem also much better to me.

This was the last example scenario in this series concerning preflop all-ins. In my opinion, the new PokerSnowie AI has massively improved in this area.