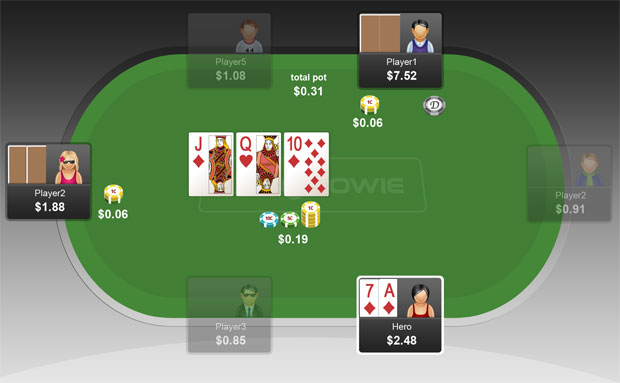 The hand: hero called, the turn 4c and the river 9c were check down, and the preflop raiser won with a straight.

Hero defended the big blind with Ad7d. He flopped the nut flush draw and a gut shot to the Broadway. He is facing a bet and a call. It would be silly to fold a hand with good equity, but should hero call or raise?

Evaluation from the old AI = RAISE

Evaluation from the new AI = CALL

It is relatively easy to decide between a losing or winning line, or to fold when both lines are losing money. However when faced with strong combo draws, we have to determine which line wins the most and this task is much more difficult.

There are some factors which are influencing the decision to raise:

However, there is a more compelling case to justify the call:

Therefore because of the board texture I will go with the new AI and just call here. However notice how close the decision is, both lines are only separated by 0.08 in equity.

The hand: hero called, the turn 4c and the river 9c were check down, and the preflop raiser won with a straight. Even if he had lost, hero should be happy with his play. For a very cheap price, he bought two cards to draw to the nuts with good equity on the flop. Who knows what would have happened if he had check raised the flop?

With the old AI, PokerSnowie evaluations were very good for dealing with draw situations, however the new AI has improved and made these evaluations even stronger.