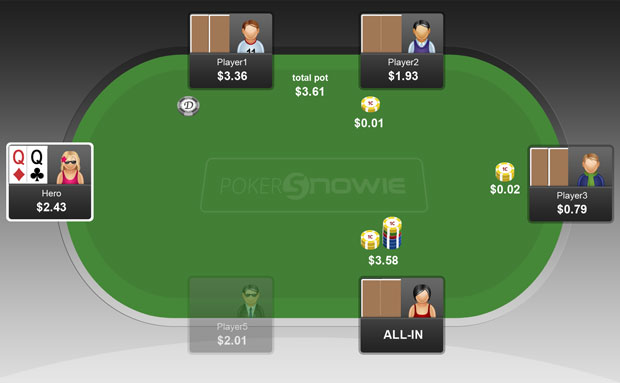 The hand: Hero called and villain had A3o. The board ran KJ75K, and hero doubled up.

In this example scenario villain had opened all-in for 179 blinds from under the gun!  This is not an orthodox situation, but we still have to deal with it.

Evaluation from the old AI = Fold

Evaluation from the new AI = Call

Again, we use the same method as in previous examples.

Be careful, only a part of villain’s stack is at risk. Hero is playing only for $2.46 (2.43 from villain stack and the blinds).

Determine the equity of QQ versus villain's range.

To analyze this decision, we cannot use the same ranges we used in the previous examples, because opening all-in for 179 blinds is not part of a sound strategy. Assuming villain is pushing the top x% of the hands with a balanced range would be wrong. Most likely his range isn't balanced at all.
If villain had a very powerful hand, for example pocket aces or pocket kings, he would more likely open small to encourage more action. I'm not suggesting it is impossible because I have seen players doing this move with aces or kings, but it is very unlikely.

Therefore, the way to make the right decision is to figure out what is their range on average. Most of the time, villain will turn a small pocket pair, ace high, suited connectors or even total trash. Consequently, on average, pocket queens totally crushes villain’s range. The new AI evaluates this situation correctly and estimates the call will win on average more than 58 blinds!

This example emphasizes how the learning process of PokerSnowie can be useful. Since the AI learned poker by experience, rather than brute calculation, it recognizes villain's range is much weaker in this situation compared to other examples. Despite having the worst pot odds and three players behind instead of one, it is a much bigger call.