In Part I of this article we examined how member feedback and PokerSnowie's learning algorithm was able to identify several sources of recurring weakness and address these, resulting in a major update to the core AI brain.

PokerSnowie also recognised that whilst we are proud of how strong and well balanced PokerSnowie plays, there is always room for additional improvement. One such example of a development currently underway is the following: PokerSnowie is limited to 3 bet sizes, half pot, pot and two times pot. While this covers the whole spectrum from a small bet to a significant overbet, it could be, that allowing more bet sizes and therefore giving more flexibility to PokerSnowie of choosing the optimal bet size, would make another boost to its playing strength.

Other examples from the past clearly illustrate the importance of member feedback and a focus on improvement. For example, when the PokerSnowie Challenge first debuted, some astute players quickly found a method to win against it. They did this by making lots of mini-bets (like 5% of the pot), and observed that PokerSnowie would fold too much and play much less aggressively than against a check. While such a strategy is weak in principle, against PokerSnowie it was quite effective. Once this loophole was discovered we engineered several of PokerSnowie's algorithms to counter this ploy, without touching the underlying neural networks. From then on, mini-bets were simply what they are supposed to be: a losing strategy.

Here are more examples of the recent improvements.

Multi-way pots have always been more difficult for PokerSnowie to master. These situations are more complex and don't occur very often in rounds with strong opposition. PokerSnowie's expertise in this area has now evolved significantly. One example is shown here:

PokerSnowie found it advisable to lead out against 3 opponents with a bluffing hand that has very little potential. The board texture is such that the opponents probably didn't hit anything either, but nevertheless there are more profitable bluffing hands available. PokerSnowie could bluff here with a flush draw, maybe also with a backdoor flush draw to the nuts, but should not do so with its actual hand. When being called, Qd8h is far too weak, with little potential to become the winning hand.

The new PokerSnowie brain checks this hand 100%, which looks like the correct move.

2) Blind vs. blind in ring games 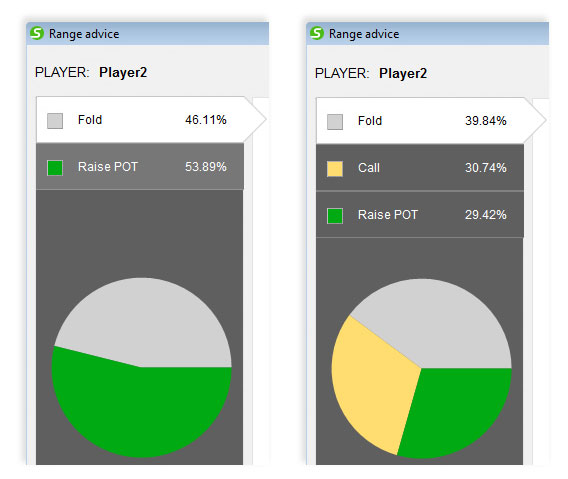 In the previous PokerSnowie version, the AI brain never wanted to limp in blind vs. blind ring game situations, it would have been a fold or raise situation. Many online players also follow this strategy when opening the pot against the big blind. However, this play is not really optimal as either you have to play very tight and fold a big portion of your hands, or you play too loose and open yourself to exploitation, by frequent re-raises.

This unique situation has been significantly improved. Instead of raising 53.89% of the range, PokerSnowie now raises only 29.42% and limps with 30.74%. At the same time PokerSnowie makes sure to balance its limping range, by adding premium hands like KK, QQ and AK. Overall, this opening strategy is far more robust and less exploitable.

Stay tuned for more exciting new developments in the near future!