How is PokerSnowie doing after 3.3 Millions hands played? 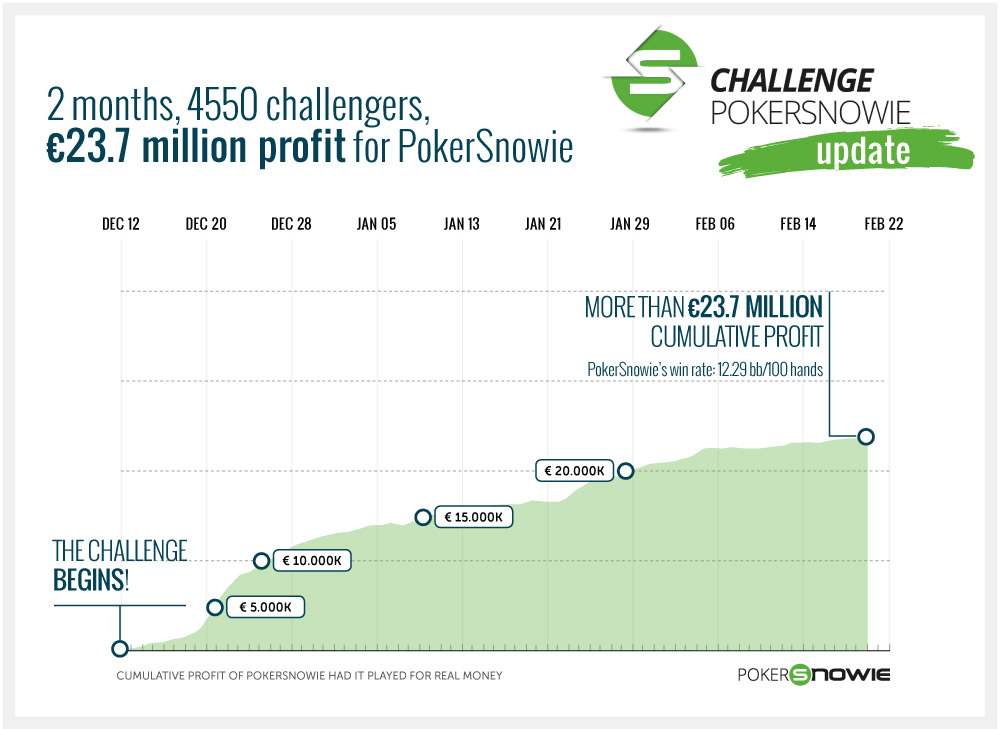 Another month has passed and 1.5 million more hands have been played against PokerSnowie. So we thought it was probably time for an update
Since December 12th 2013:
If we’re removing the outliers (less than 100 hands played, and an error rate above 25), we have 2.8 million hands played on an average error rate of 14.05 and a profit for PokerSnowie of €12.3 Million (12.29 bb/100), which again, is worth having!
So let’s drill down into the data:
As we anticipated PokerSnowie's overall win rate has gone down slightly as players have continued to improve and optimise their game.
But the figures confirm the trends that we had already seen in our previous updates: PokerSnowie wins consistently more against its weaker opponents.
This really confirms the objectivity of the error rate as a very solid evaluation tool for a player’s level. 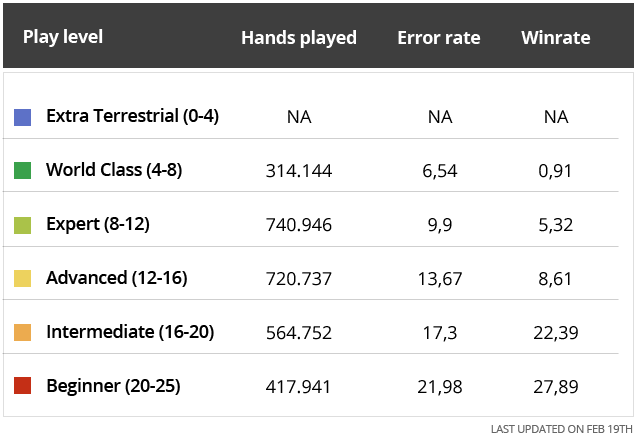 Similarly, when segmented by table size, the relationship between levels of play and win rate is highlighted further: (95% confidence level variance indicated in brackets next to the win rate) 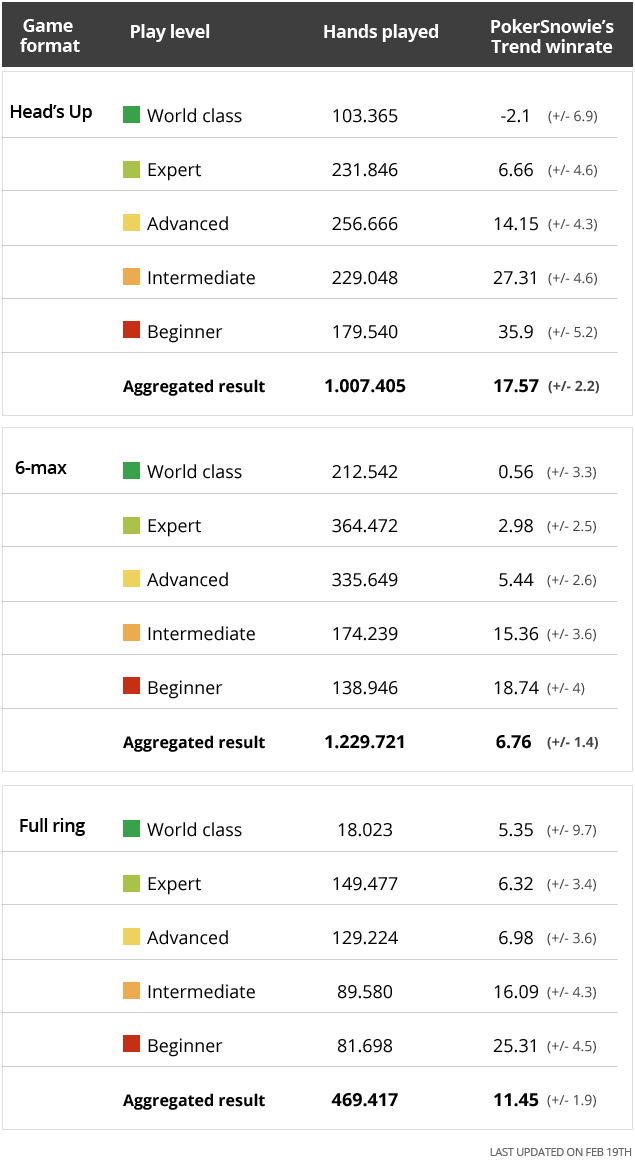 PokerSnowie continues to show its particular strengths in the HU format, although it is at present slightly behind some of its world class challengers.
So would Dan “Jungleman” Cates or Viktor “Isildur” Blom beat PokerSnowie? Over the last 50 000 hands played HU against world class opponents, PokerSnowie was a 0.42 bb/100 winner; or to put it another way, the evidence suggests it would be a challenge worth watching!
The number of “well established” PokerSnowie challengers has nearly doubled in a month: 100 individuals who played in excess of 5000 hands each, totalling 1,076,880 hands. Against this group of players, PokerSnowie has actually increased its win rate from 9.85bb/100 a month ago to 11.69bb/100. Still, just under 1/3 of the players managed to come out on top.
The next big feature update to Challenge PokerSnowie is coming Monday 24th of February with the launch of….well we can't really tell you now, can we?
But, to give you a hint, we’ll borrow the words of Alex, one of our product testers:
“Wow, this is GTO poker training on steroids!”

You should include the win rates for error rates > 25! Obviously. It is fine to separate it but it is disingenuous to leave it out altogether.

In the last "Challenge PS update", I was ranked 1st in the Full Ring games for players that played >5K hands. And there were only 3 winners in that category (i.e. Full Ring > 5K hands). Can you please tell me my current leaderboard status in that category? I've played just over 20K hands now. Also, I've heard in some your interviews that PS "improves and plays differently" every day. Do we as PS subscriber automatically gets those "improvements" daily or only when there is a official software update? Has there been a brain AI update that we since the last "Challenge PokerSnowie" update in this blog? Thanks!

The real time evaluation is great but I would prefer to get the feedback after my decision and not before. What was the reason you programmed it the way you did?

I just tried out the new "Real Time Evaluation" tool. GREAT addition to the Snowie Challenge. From a personal standpoint, I play the Challenge portion of Poker Snowie frequently. After a session I go back and look at my errors. At this time I have the Blunder Threshold set to a lower number than the default. In that way I get enough feedback to focus on errors that are more than "noise." (An error of .02 BB is not extremely relevant at that point. But there can be some rather costly errors that are < 2.0 BB, the default blunder level) With the new Real Time Evaluation I find that I can look at the recommended play, and try to understand what Snowie is "thinking," if different from my own line of reasoning. I think it will be an effective learning tool for me when used in this way. On the surface, it looks like this will tend to destroy your own stats evaluation. Obviously, everyone could now play "perfect poker." Perhaps you have found a way around this for evaluating results. Perhaps not. But once again, I think the Real Time adviser is a wonderful addition to the product. I think it definitely increases the value of the Poker Coach product. Terry

I think we can expect PokerSnowie's edge to drop dramatically going forward. It's just too easy to cheat with the live advice option. Following the x-millionth hand results was fun while it lasted, but the real goal is improving my play. This option will certainly help with that. I plan to make my decisions and stick with them regardless of the advice in order to not cheat myself. Question: What do you think of the idea of making small mistakes in exchange for avoiding bigger ones later? For example, PS suggested that I call a raise from the BB with ATo. Instead, I opted to make a very small mistake and 3bet/fold it to avoid making bigger mistakes postflop trying to play it from OOP.