A few tricks to adapt PokerSnowie to the real world! 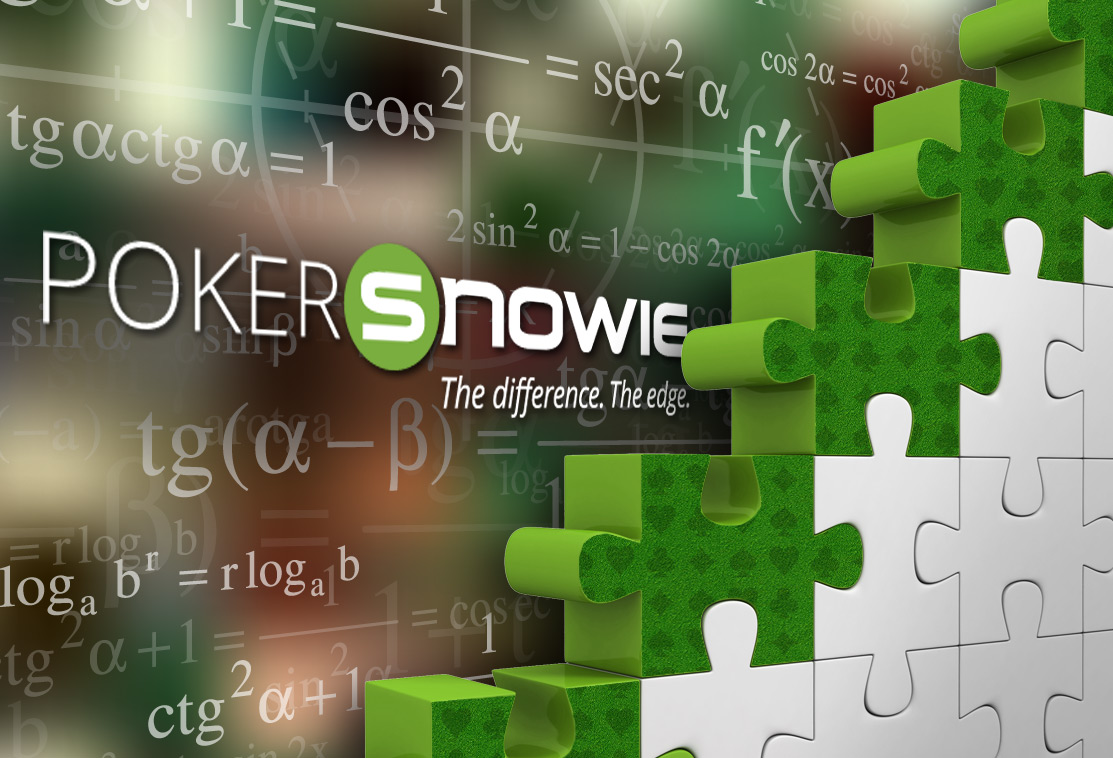 This article will provide a few tricks on how to use the “Scenarios” tool of PokerCoach to develop more realistic evaluations when ranges are far from the theory.
Dealing with limpers
We all know that limping is far from the optimal strategy. Having limpers at our table is often very profitable but PokerCoach won't always be able to put them on a proper range if we don't twist the reality a bit. Let’s look at some examples:
Versus a limp call 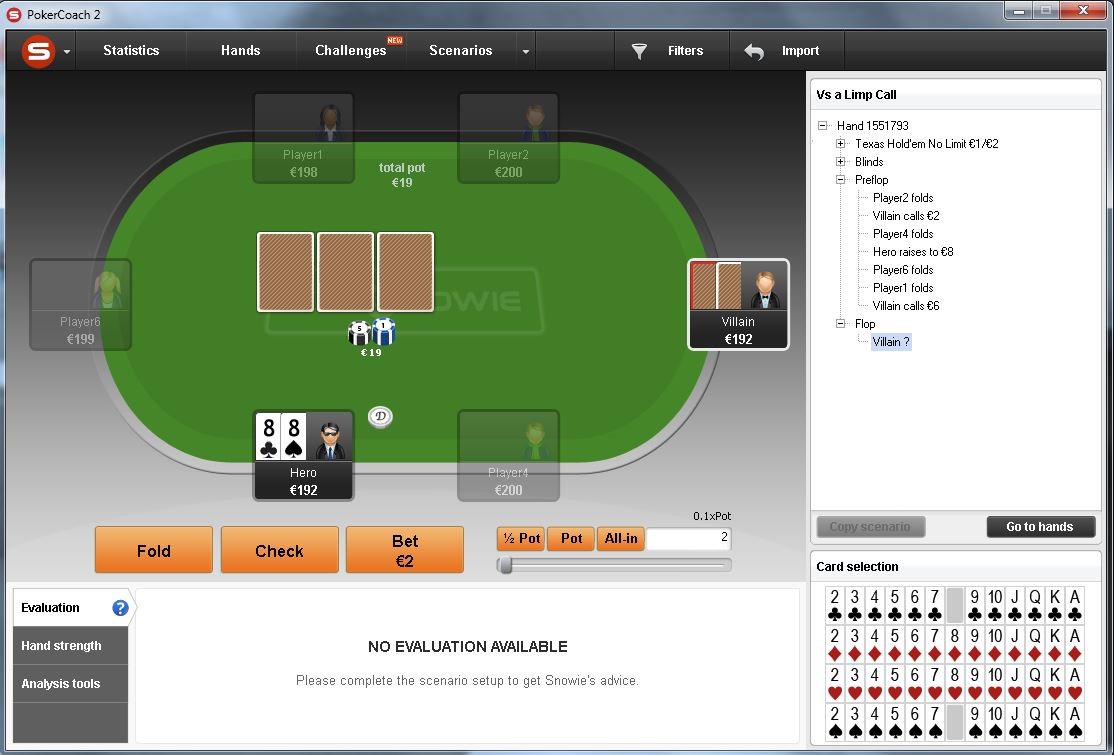 Villain limped from middle position and hero isolated him on the button. Most of the limpers would raise with the top of their range and limp call with their medium strength hands. Since isolating limpers is one of the best line in Poker to make money, hero would probably do it with a wide range.
PokerSnowie will put both players on very different ranges: the limper’s range will be too tight and the Big Blind’s range as well.
The best way to adapt both ranges to the reality is to seat the limper in the big blind. 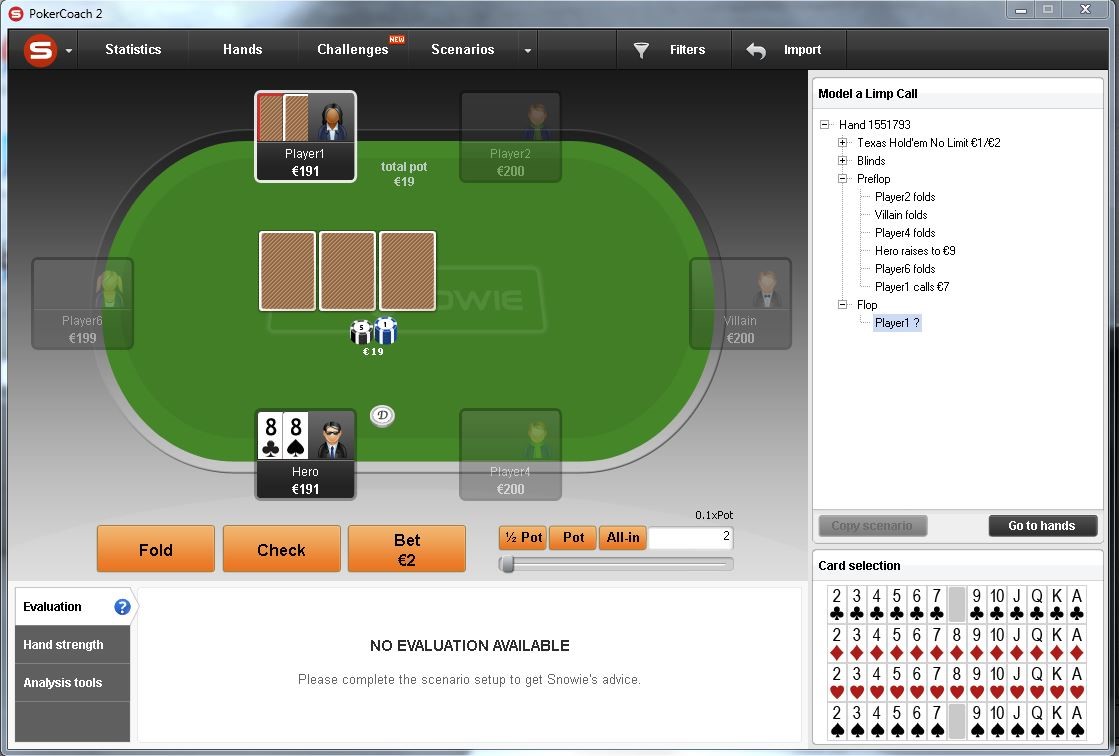 Note that hero is opening to 4,5 BB. This will have the following effects:
- get the same size of the pot post flop.
- tightened up a bit Hero’s range but an isolation should be made with a tighter range than a button opening range
- capped villain range which is often true for a limper.
When another player gets involved 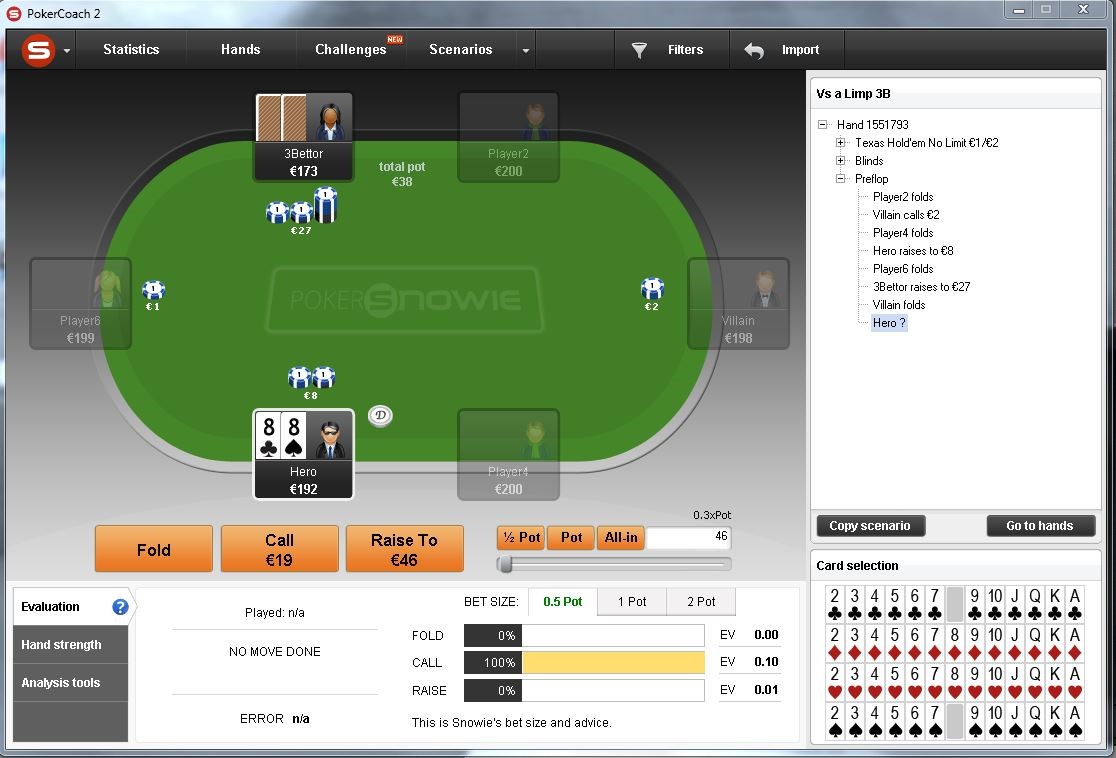 This time the big blind elected to 3bet. PokerSnowie will assume that the BB’s range is pretty tight while he could be 3betting wide to counter the isolation play.
Once again a good way to analyze the situation is to eliminate the limper and to open raise 0.5 BB larger from the button. 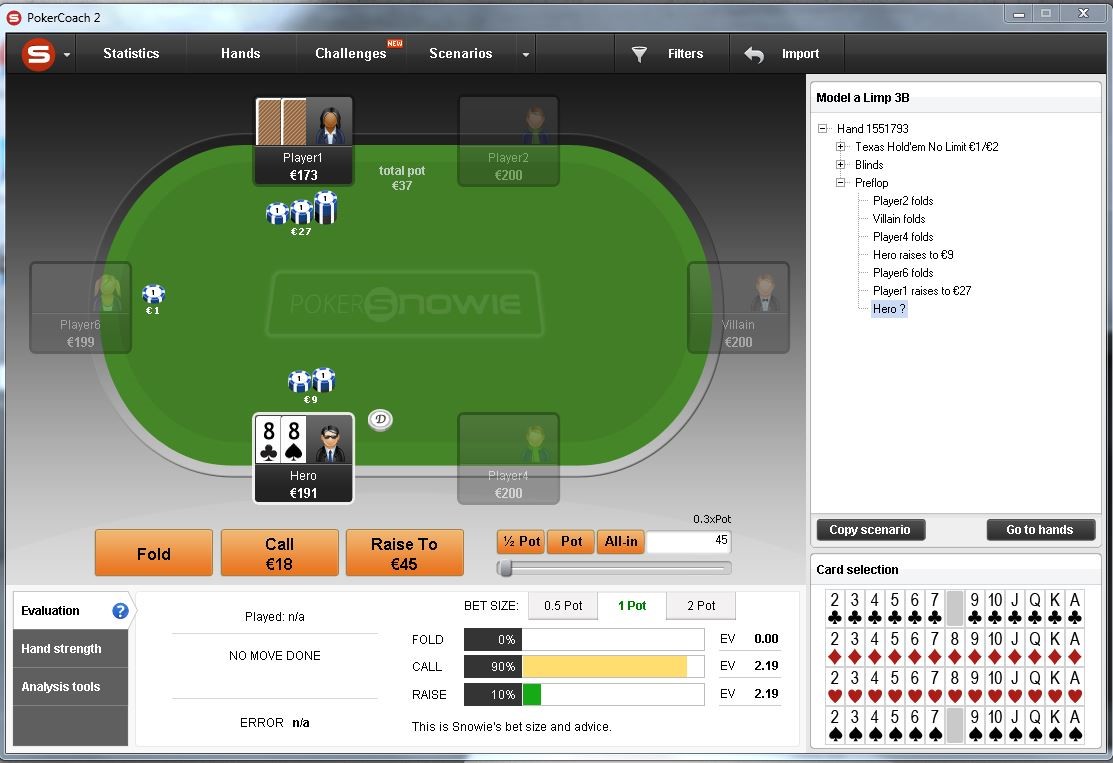 Note that hero's equity has gained 2BB and a 4bet is now a viable option.
Adapting ranges
Adjusting opening ranges
PokerSnowie assumes that villain is opening close to 16% from UTG. With JTs he advises to call 58% and 3bet the rest of the times. 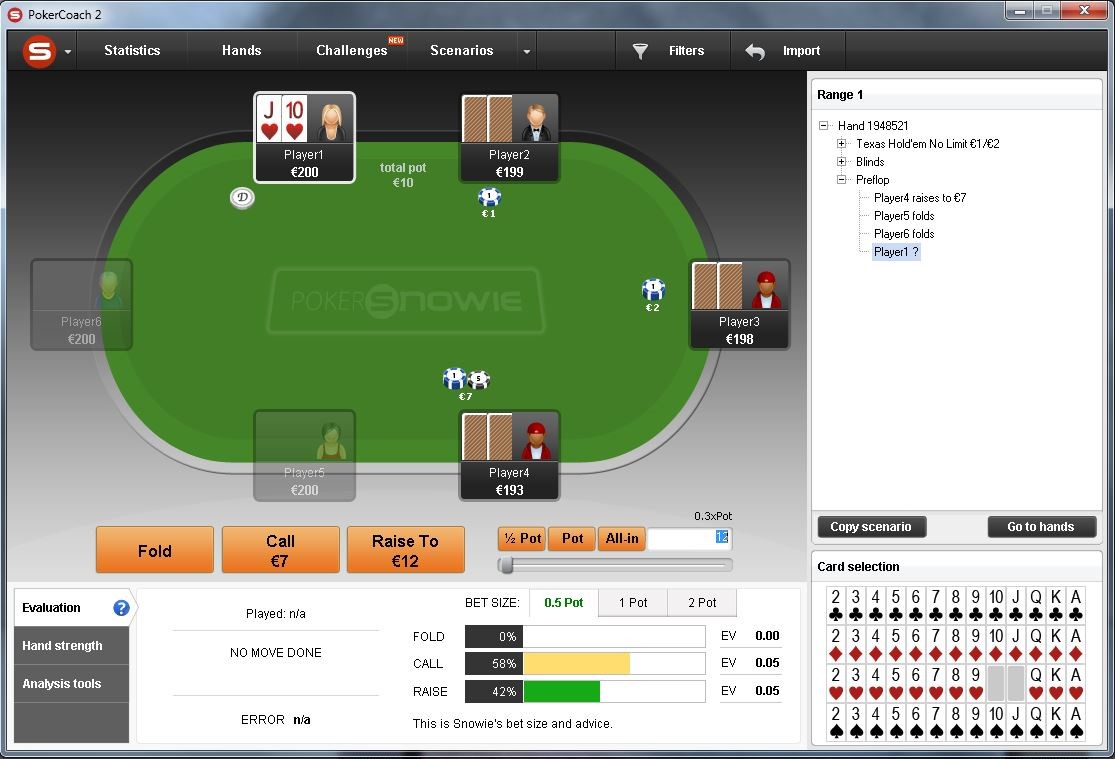 If we suppose our opponent looser, we can move him to the hijack seat. Poker Coach will put him on a 22% opening range and we should 3bet him more often. 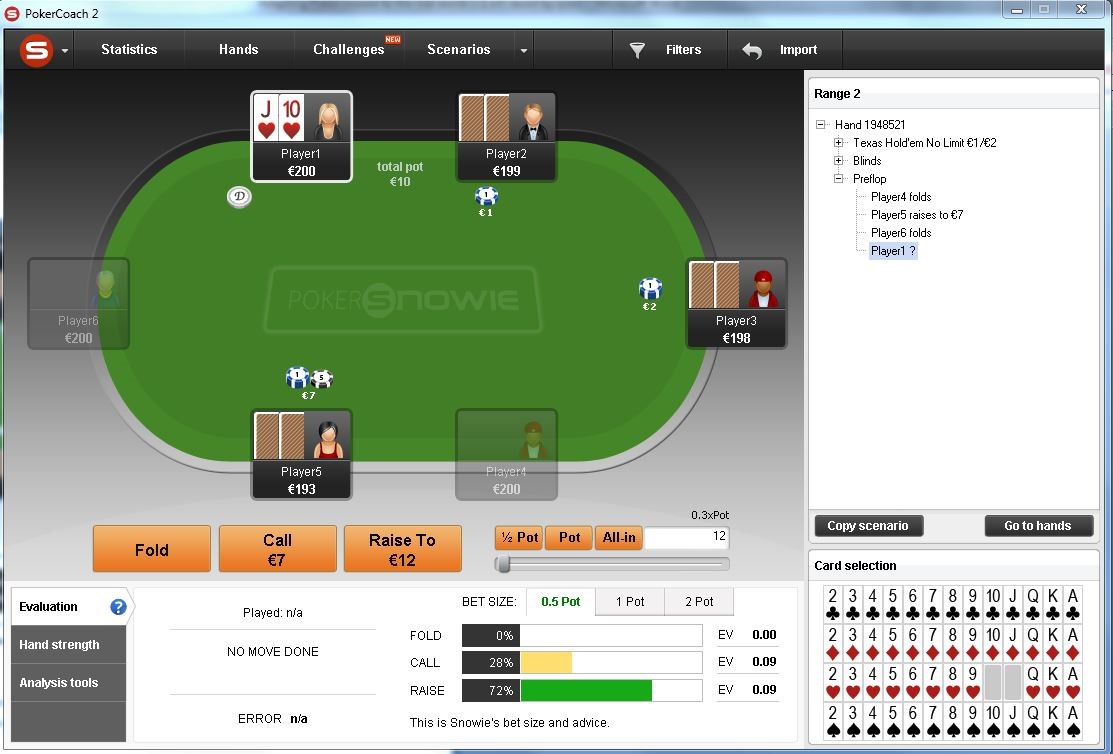 Now we suppose villain much tighter, we seat him at a full ring table to adapt PokerSnowie’s opening range to 10%. And it is no more profitable to defend JTs against his range. 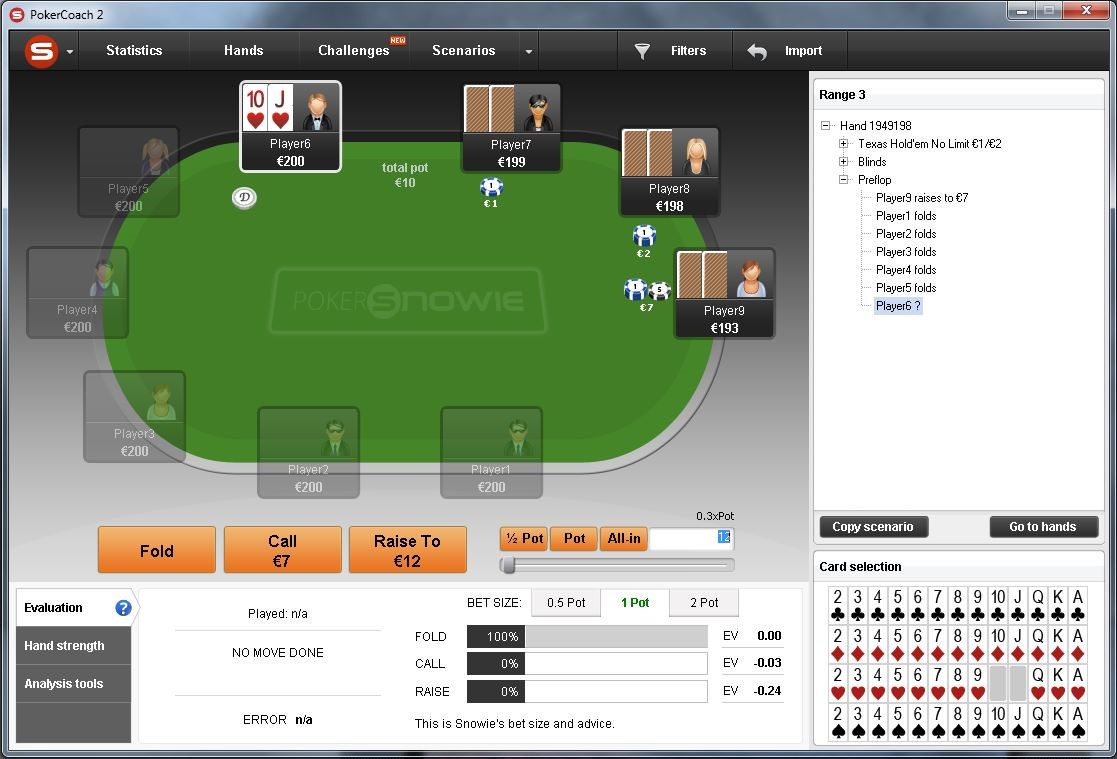 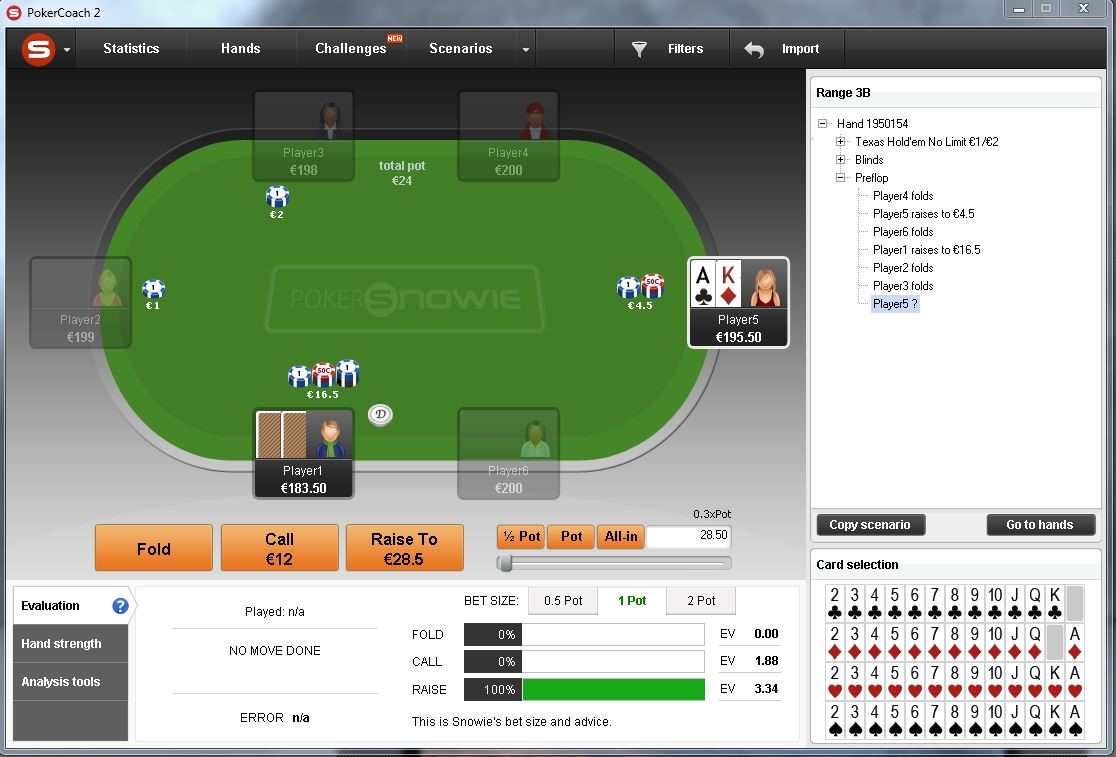 Adapting ranges and situations can be useful to analyze some positions in depth. But I would not advise spending too much time doing this. It is better to just learn the right play from PokerSnowie and adapt our actions from it. It’s also important to remember that we cannot take for granted that a player who is making mistakes pre flop, will then play GTO post flop.
We’d love to hear your feedback – so let us know how you adapt Pokersnowie’s analysis tools to your own game and learning.

Is a Poker Snowie for the Mac computer coming soon?

Hi, there are no immediate plans to have a mac compatible version. However, several users have reported being able to use PokerCoach successfully with a windows emulator.

what is with the mobile version? any chance to get it this year?

This is a good example of GTO strategy vs. exploitative strategy. If PokerSnowie is approximating GTO, then it can't be a losing strategy to play as Snowie suggests given the scenarios as they actually happened. The adjustments you suggest here might move one towards a more *exploitative* strategy, so you might make more money with these plays than the GTO approach. Where GTO comes into play is against good players; by definition, any non-GTO strategy is in itself exploitable, so these adjustments would lead to counter-strategies by villain, requiring further adjustments by hero, and so on, until both players converge on the GTO strategy once again. Obviously in real life, villain is unlikely to be such a good player; he is limping after all; but it bears keeping the difference between the two strategies in mind.

A couple of real world questions are perplexing me about PokerSnowie's preflop selections: 1. Heads up, if I'm in the Big Blind with 100BB & the Villian has 100BB. If he opens with between 69BB and 99BB I should reraise All In with 88+, AJs+, and AKo. But if he bets just one more BB, i.e. he pushes All In for 100BB I'm only calling with TT+ & AKs. I can't see how he is ever NOT calling that shove (with odds of about 9:1), so why the disparity? 2. Heads Up, both with 100BB stacks: If villian opens for between 26 to 39BB, or 41 to 99BB, when I raise PokerSnowie says it should be All In. But if he raises for precisely 40BB, when I raise, PokerSnowie says it should be a half pot bet. Likewise, if villian limps and I raise him Pot, if he reraises between 26 to 39BB, or 41BB to 99BB, PokerSnowie says on my best hands I should shove. But once again, if the bet is exactly 40BB, I should only bet a half pot. OR, if I open from the Small Blind, a pot sized bet, if the Big Blind reraises between 26 to 39BB, or 41BB to 99BB I should shove. But if he reraises exactly 40BB, PokerSnowie says any bet I make should be for half a pot. What is it about 40BB raises that is so different?