How to learn with PokerSnowie 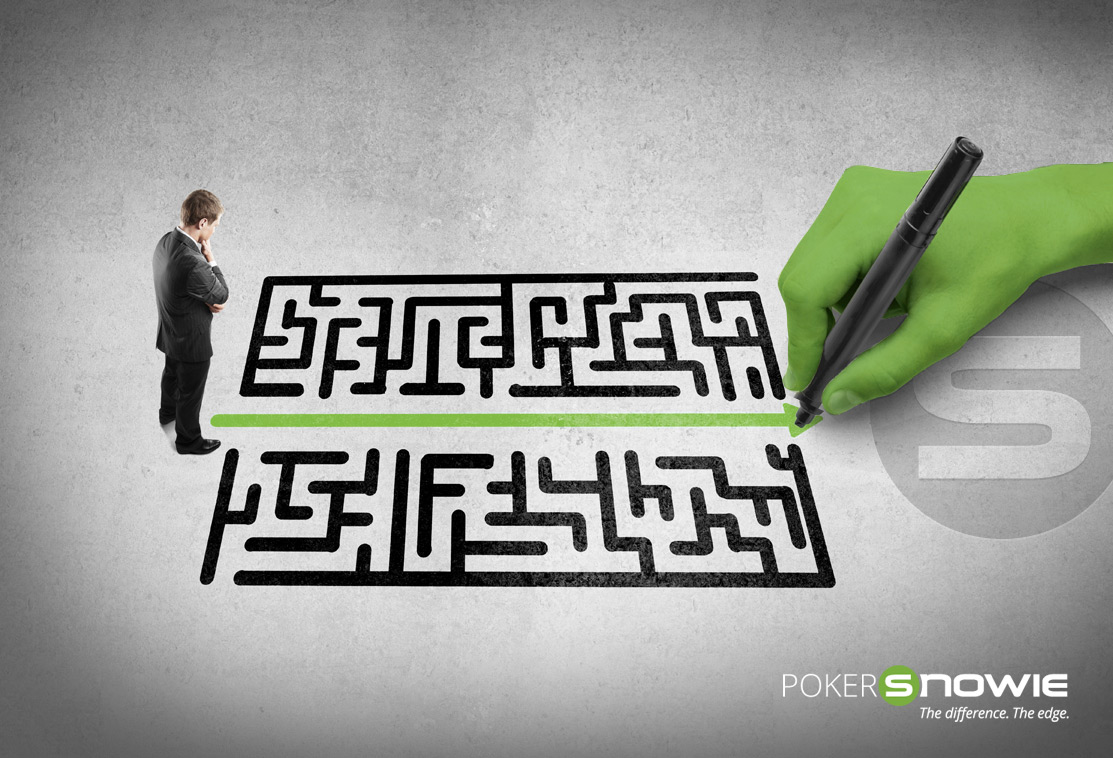 This week's article aims to start answering a question you have asked us often - what is the best way to learn with PokerSnowie and PokerCoach?.

PokerSnowie's learning algorithms are based on the Game Theory Optimal framework. Studying game theory is certainly one of the best way to improve in poker and here are three areas in which we can progress a lot with the help of PokerSnowie.
Evaluating our hand’s equity against our opponent’s range
This is the bread and butter of analyzing with PokerCoach. When it analyzes a session or a database, PokerSnowie reviews all the hands we had played and discloses our errors. This means it highlights every decisions on which we took a line that was not optimal and as a result, gave up some equity.
To do so, PokerSnowie is imputing ranges for our opponents, assuming that they are playing perfectly. We all know this is not always true, but PokerSnowie remains a very good tool to alert us to all the situations where we might have played incorrectly.
Let’s look at an example: 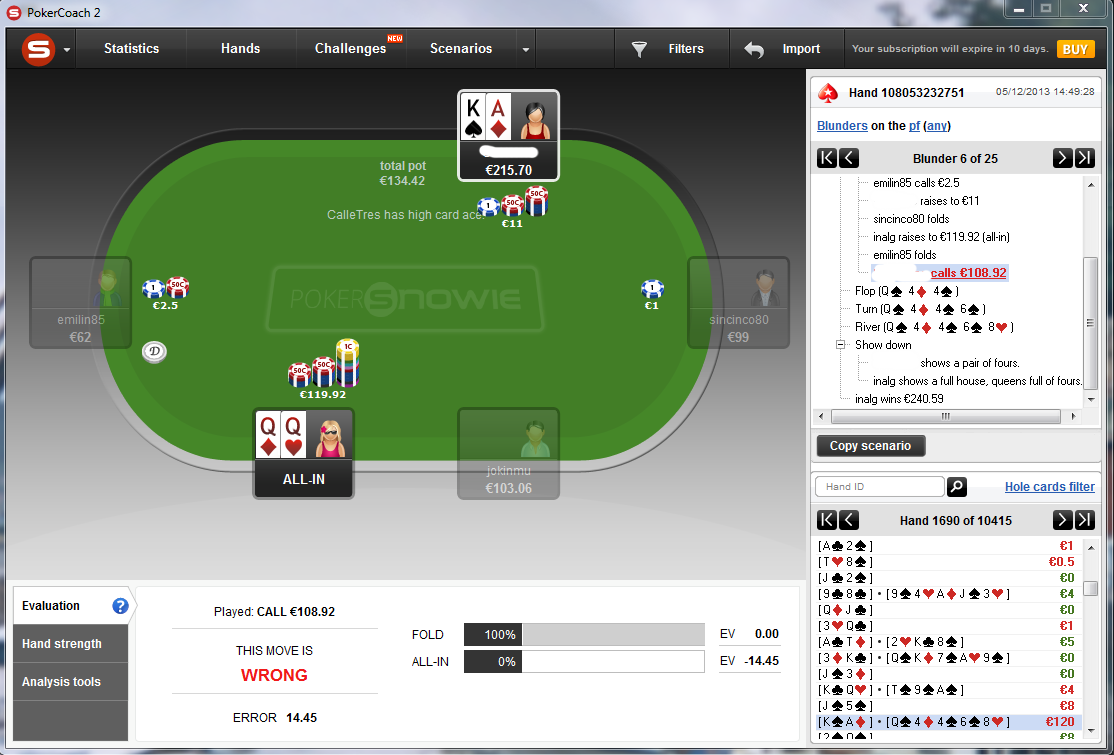 If I had analyzed the database of this player without the help of PokerCoach, there are 99% chances I would not have spotted this mistake. Both squeezing and stacking off against the cut off with AK seems utterly standard.
But PokerSnowie considers it is a big blunder, losing more than 14BB in equity. Can our opponent’s range be so different than the one PokerSnowie put him on to turn a call into a +EV play?
Since it is an all-in situation we can easily do the math:
Hero has to call 108,92 to win 134,42.
His hand needs 108,92/243,34=44,76% in equity for the call to be correct.
If villain pushes {AK and JJ+} Hero has 39,8% and calling would be a huge blunder. Villain has to push the range {99+ AQs+, KQs, AK}, for the call to be correct. Hero would then have 44,9% and it would be a small mistake to fold AK, while calling would be coin flipping for almost 109BB.
In this example, the effective stack was 120 BB. With the help of the menu Scenarios we can analyze the situation deeper: what range should we stack off with if villain had a stack of 100BB or 80BB?
Next time you face a similar situation, you’ll be prepared and remember that a call is not automatic. You will know with and against which range and for how many BB you should stack off.
Determine our perceived range and the relative strength of our hand
It is a very important concept and underestimated by many players. There are times it's correct to bluff catch with no pair and others where we should fold everything but the nuts. 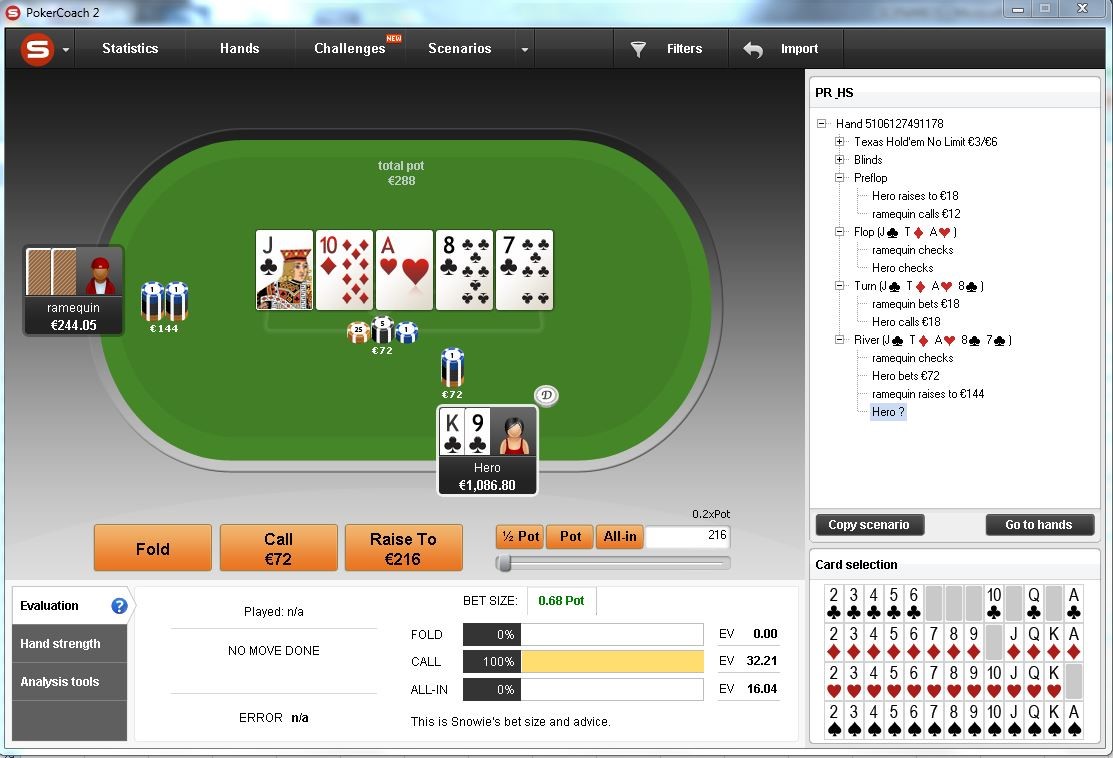 In this example, hero moved all in and gave up 16 blinds in equity. Since he blocks the straight flush, he holds effectively the second nuts. But with the action taken on the river, the chances that villain will call the all in with a worse hand are pretty slim.
Beyond its absolute strength, understanding where our hand stands is critical to make good decisions in poker.
Exploit but don’t be exploited
PokerSnowie teaches us to bet according to our range and not according to our hand, both in sizing and frequency. Adopting those lines makes it tougher, for competent opponents, to have a read on us. It doesn’t deter us to take more exploitative lines against weaker opposition.
How can we apply this to real situations? 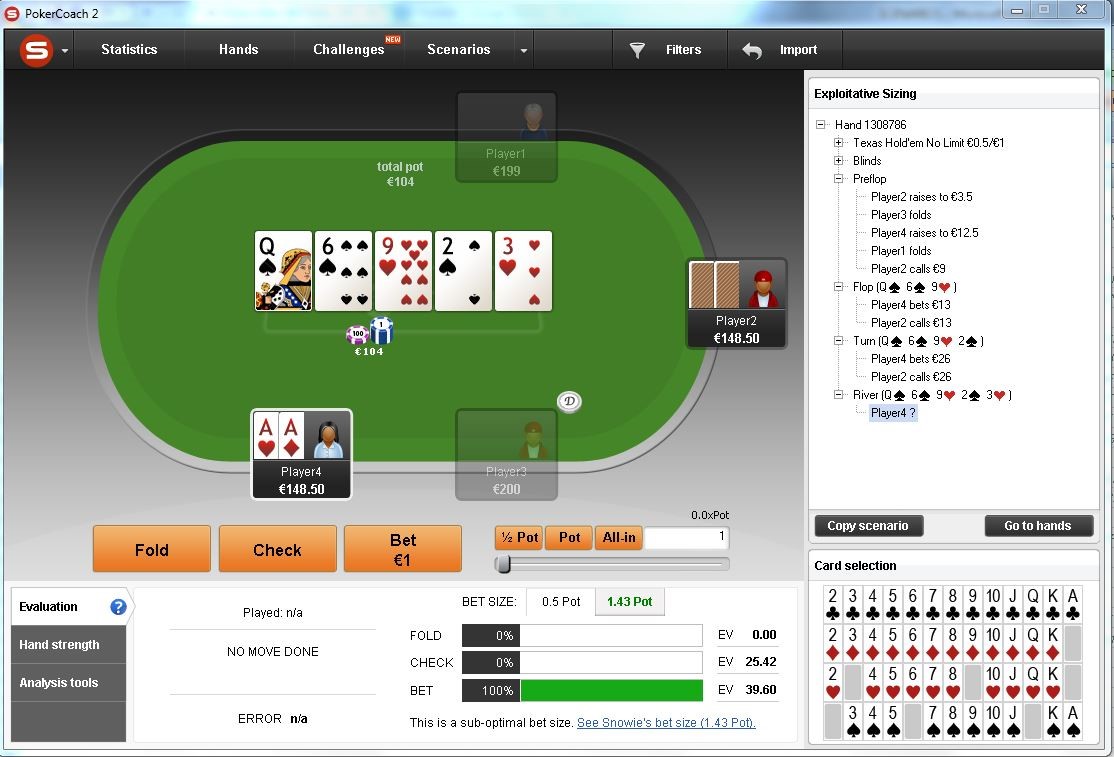 In this hand, we did 3bet preflop with AA, 200BB deep. Against a weak player we should bet half pot on the river. By doing so, we would make a 15BB profit in equity. The cutoff has a lot of one pair hands in his range that he could bluff catch with on 3 streets.
This sizing would be a mistake in theory, since our range should be more polarized. We want to move all in for value when we hold a flush or a set and as a bluff with busted straight draws (JT,KJ and KT). AA is not strong enough to be pushed. Our opponent’s calling range will beat that hand. PokerSnowie evaluates that moving all in would lose 5BB in equity.

Betting half pot would also be a bad play against a good thinking opponent. He would figure out that we couldn’t have the nuts. He could then turn some of his hands into a bluff and move all in on this third barrel.

Those were just three examples of how to use PokerCoach's analysis tool to learn from PokerSnowie's play. How do you use PokerCoach? what results is it having on your game? Let us know in the comments, we'd love to hear from you how you're using PokerSnowie to take your game to the next level.

Great article. I have only scratched the surface of all the features in PokerSnowie. This post will help me with these later. For now, I just try to keep my preflop and flop errors to a minimum. Whenever I face a decision I am unsure about, I stop the Challenge and learn it right away. I make a note to refer back to later until it becomes automatic. Once I am happy with my average flop error numbers, I will worry about turn and river play which is where I have pushed most of my blunders. Soon, I will push them pass the river and out of my A game completely.

I posted a comment yesterday but it seems to be missing, so I'll try again. Can you explain the following to me (where Heads Up ($1/$.5), I have 100BB in the Big Blind and my opposition has 100BB): 1. If he opens for 99BB, I am supposed to reraise All In with 88+, AJs+, AKo But if he opens for his whole 100BB stack I'm only supposed to call with TT+, AKs Why such a difference? 2. If he opens for between 26BB to 39BB, or for greater than 40BB, if I bet I'm supposed to push All In. However, if he opens for precisely 40BB, I'm advised to reraise half pot. Similarly, if he limps, I raise Pot, and he then reraises me exactly 40BB, the advice is again to raise half a pot (whereas bets of 39BB or 41BB would warrant a shove). Or, if I open for a pot sized raise from the button and the Big Blind reraises 40BB, I'm recommended to raise half a pot. What is so different about a 40BB bet that it demands a half pot bet versus an All In bet for 26-39BB or 41BB+?

Hi Simon, Thanks for your question, let me try to give you an answer: 1) This situation is far from standard and PokerSnowie has not learnt it during training. The observed behaviour is an artefact of the algorithm to treat such situations. 2) There is indeed nothing special with 40BB. In your example, PokerSnowie changes the proposed bet size at some point (at 40 BB) from all-in to 0.5 pot. At 41 BB, however, the choice between the two bet sizes is eliminated (by another algorithm) and PokerSnowie only gets the choice of playing fold, call or all-in. I hope that brings some clarification.