Jan 13, 2014  |  Posted by PokerSnowie  |  2
So far we have looked at PokerSnowie's preflop tables and have examined several parts of its preflop strategy. This article is about constructing proper ranges postflop (flop + turn).
We'll look at a very general and easy concept, one that many players don't seem to know, causing them to misplay their hands regularly.
Here is an example hand: $5/$10, 4 players with 100 BB. The cutoff player raises to $20, it gets folded to the big blind player who then calls. The flop is 6c 9d Kh. The big blind player checks and the cutoff player makes a continuation bet of half the pot, $22.50. 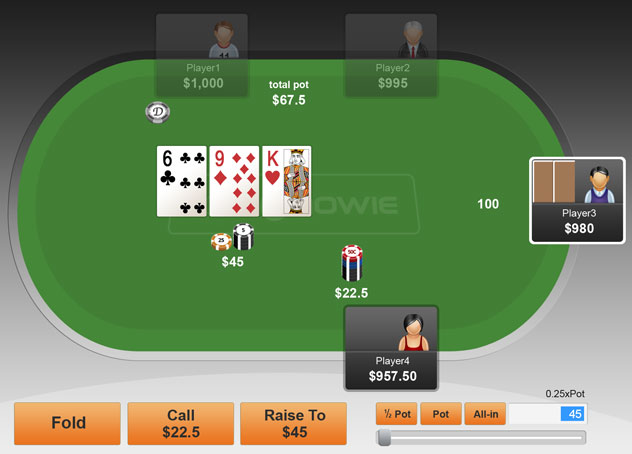 How should the calling and raising range look?
Let's have a look at the different classes of hands, taking one specific hand to represent each class:
1) 66 - Strong hand
66 makes trips and is one of the best hands possible with the given flop. The big blind player should use the best hands to raise for value. It's sometimes good to slow-play with hands of this category, to strengthen the calling range and with the idea to raise on the turn.
2) T9 - Medium hand
This is a good example for Sklansky's pot size philosophy: "Big pots and big bets are for big hands" (No Limit Hold'em, by David Sklansky).
With a pair of tens it is not good to raise. Instead of building a big pot with a questionable hand, it is much better to control the pot size and just call, with the idea of trying to go to the showdown as cheap as possible. Your hand is good, possibly the best hand at this point, but raising turns the hand into a bluff. When you get called, your opponent too often has a better hand than yours.
3) 87 - Weak hand with a lot of potential
You are holding an open-ended straight draw, exactly the right type of hand to make a semi-bluff! Your value-raises with strong hands need to be balanced with bluff hands. With only a draw, you would be happy to make the opponent fold and win the pot right away. However, if your bluff is not immediately successful, your hand has enough potential to improve to the winning hand on the turn. That gives you two ways of winning instead of just one: make the opponent fold his hand or hit your draw on the turn.
4) Q8 - Weak hand with very little potential
A hand like Q8 is not only weak, it is also difficult to improve to the winning hand. If it is used to bluff and your bluff is called, even a Queen on the turn may not be enough to take the lead.
Many players think more about timing than about cards. They have thrown away their hand on the flop several times in a row, and then they decide to bluff-raise with just any hand. That's a costly mistake. If you get called, you're left with no hand and no outs. This category of hands clearly has to be put into the folding range.
What if the flop texture doesn't offer any draws? How can I then semi-bluff?
On some flops you can't hold many hands with a lot of potential. If the flop is 2d 7s Qc, for example, there are no draws possible. Nevertheless, it is very important to mix your raising range with bluffs. If you fail to do so, your opponent can easily throw away his hand each time you raise, and you can't extract a lot of value with your strong hands.
Even with such a dry flop, there are still hands with more potential than others. For bluffing, you should choose hands like Ks 4s, with a backdoor flush possibility and one over-card. In the absence of hands with good potential, PokerSnowie even semi-bluffs with the weakest medium hands, like 3c 2c with 5 outs for a significant improvement and a backdoor flush possibility.
PokerSnowie's strategy
PokerSnowie has learned the described concept of constructing the ranges very well. PokerSnowie just calls down medium hands, which may look a bit passive but is nevertheless correct. Its raising range is a balanced mix of value hands and semi-bluff hands. Pure bluff hands are consistently just folded.
In the example above, PokerSnowie raises 100% with 66, calls 100% with T9, raises 100% with 87 and clearly folds Q8.