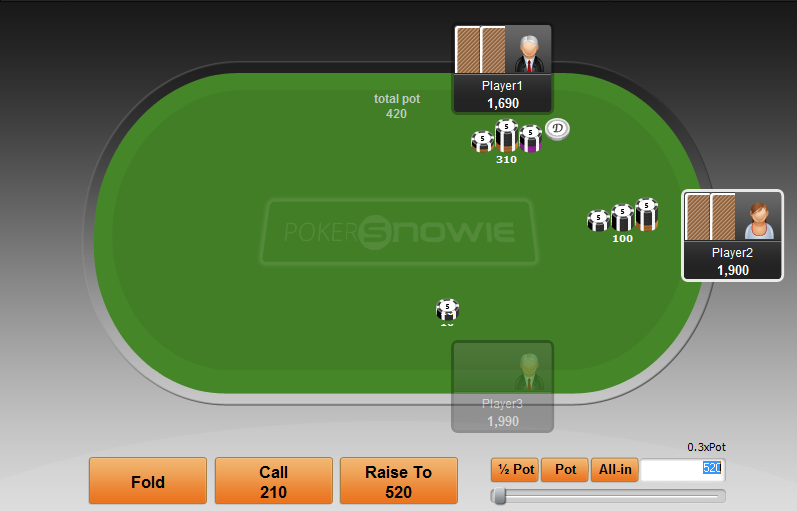 In the previous preflop examples, we saw that for constructing the calling range, a 'top down' approach was taken. To evaluate the relative strengths of the hands it is important to consider how well they play post-flop. In that sense, 65s may be stronger than A8o, for example, because it can be played much more aggressively, even if only a draw is hit.
For hands of the same category, it is obvious that a higher hand is better than a lower hand. For suited connectors, for example, KQs is better than QJs, which is better than JTs and so on. Or is it not that obvious?
Here is an example situation after a 4-bet. 3 players play $5/$10 with 200 BB. The button player raises to $30, the SB player re-raises pot to $100, the BB player folds and the button player makes it $310. 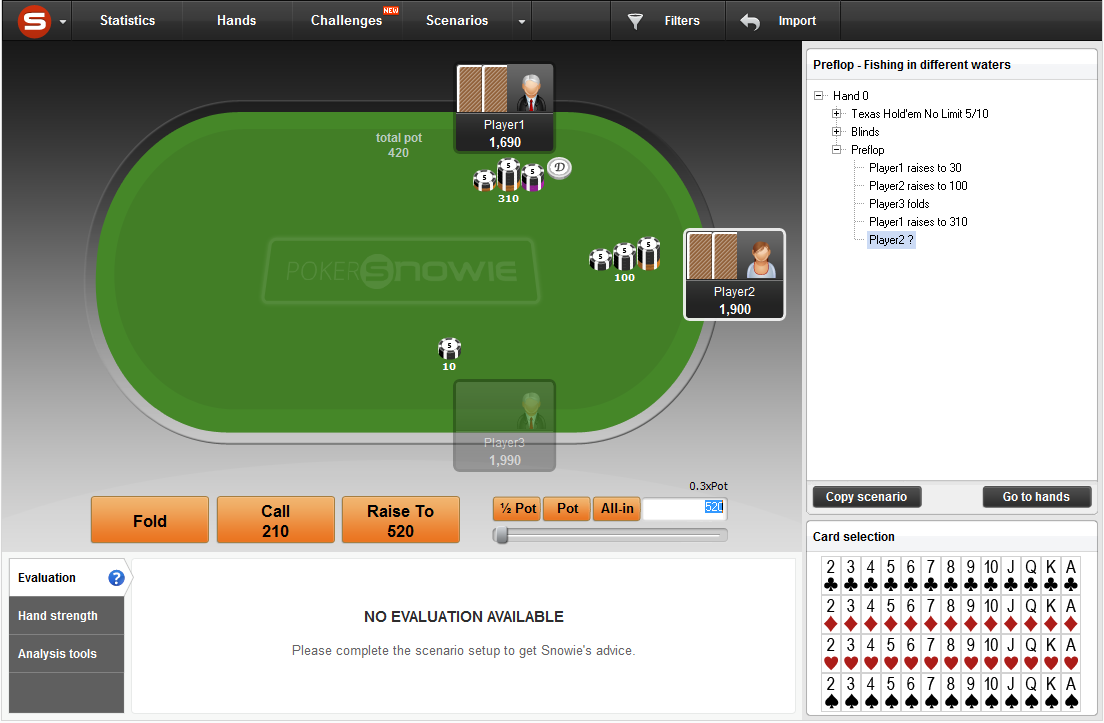 If we look at PokerSnowie's preflop table, we see that PokerSnowie folds with QJs but calls with 'weaker' hands, like 87s, 76s and 65s. What is going on here? Is PokerSnowie nuts?

Narrow hand range
So what is going on here? First of all, we notice that the button player has shown a lot of aggression by raising twice. After his first raise, opening the pot, he still holds a wide range of hands (45% of all hands). At this point he doesn't necessarily have a very strong hand. He may just have been trying to steal the blinds with a bluff hand.
His second raise, however, is very meaningful. His raising range is only 7% of the hands that he can hold after opening the pot. So his total range is down to 45% x 7% = 3%. Holding only 3% of all possible hands is a very narrow range, and it is worth looking at this 3% in a bit more detail.
Avoiding hands that are dominated
When the opponent's hand range is narrow, the individual hands in that range become more important. A close look at the button player's hand range reveals that the following holdings are quite dangerous against QJs:
KQs, KJs, KQo, AJo, KJo
If the opponent holds one of these hands, our QJs does not look very attractive. If we hit a Queen or a Jack on the flop, our hand is often dominated. We then either have to fold even though we have hit a pair (and would then also often fold the best hand), or we continue and have to potentially pay off the opponent with the same pair but a better kicker.
QJs gives us quite bad implied odds in this example, due to possible kicker trouble. We are in fact much better off playing 65s, fishing in different waters than the opponent. If we hit a 6 or a 5 it is much less likely that the opponent has hit the same pair. And even if he did, he will slow down his betting with only a low pair, making our loss smaller.
Specifics v general concepts
PokerSnowie was able to learn the general concept of how to construct the ranges in the most optimal way. The ranges should result in the highest EV and should be resistant to a re-raise. PokerSnowie has also learned strategic details, like the concept of card removal, and therefore likes to bluff-raise with small suited aces.
In the example presented here, we can also see that PokerSnowie considers the specifics of the situation. Still keeping the whole hand range in mind, the relative strengths of certain hands may be reversed, due to narrow hand ranges of the opponent. PokerSnowie's calling strategy in this example may first seem counter intuitive, but after some reflection it is in fact well founded.

I have talked myself into playing those low no gap suited connectors due to the fact you are less likely to be dominated but I would never think of trading QJs for 65s .