Dec 24, 2013  |  Posted by PokerSnowie
In the previous article, we have examined how PokerSnowie constructs its range for opening the pot. This time, we go one move ahead and look at the next decision, the opportunity to make 3-bets.
Concretely, this is the example:

What are the ranges now for the SB player?

General size of the ranges
One player has shown aggression by raising and you sit in the worst position, the SB position. You will sit out of position and have a positional disadvantage for the whole game. Therefore it is clear that in the SB position you have to play quite tight. A large percentage of your hands should be folded.
The strongest hands should of course be raised, so the raising range should be a small portion of the overall range. Also, with the SB already invested in the pot, there should be another type of hand (medium strong) that can be called profitably due to the pot odds.
PokerSnowie comes up with these percentages for the hand ranges:
Constructing the calling range
The easiest way is to forget about the raises for a second and just look for playable hands. Some of the playable hands won't actually be used for calling, but will be put into the raising range later.
The approach for deciding which hands are playable is very similar to the example of opening the pot. Those hands that are the strongest and that play best after the flop should be chosen.
PokerSnowie likes the pocket pairs, high cards, suited connectors and Ax suited.
Constructing the raising range
The raising range should consist of a balanced mixture of value and bluff hands. The value hands are again easy to choose: they are simply the strongest hands. PokerSnowie uses the following hands for value raises:
88+, AKo, AQo, AKs, AQs, AJs, KQs
The much trickier question is: which hands should be used for bluff-raising?
First of all, we have to examine how likely it is that a bluff will be called. If we raise pot in the SB position and the BB player folds, PokerSnowie has constructed the range for the cutoff position in a very solid way, so that the cutoff player will fold only 32% of the time.
Therefore it is clear that we should choose hands for bluff-raising with a lot of potential in case we get called. We can't just bluff-raise with the idea that everyone will most likely fold; we have to carefully choose the most suitable hands that play well after a call.
PokerSnowie chooses the highest suited connectors, QJs, JTs and a percentage of T9s, which is an obvious choice. These hands are good and they play well after the flop. Not only can you hit very strong made hands (a flush or a straight), but even a draw is a nice hand to play. Draws can be played aggressively and often you don't need to really hit your draw to win the hand.
In addition to the suited connectors PokerSnowie also bluff-raises with A5s, A4s and A3s. Why is that? Is there not the risk of kicker trouble with those hands? 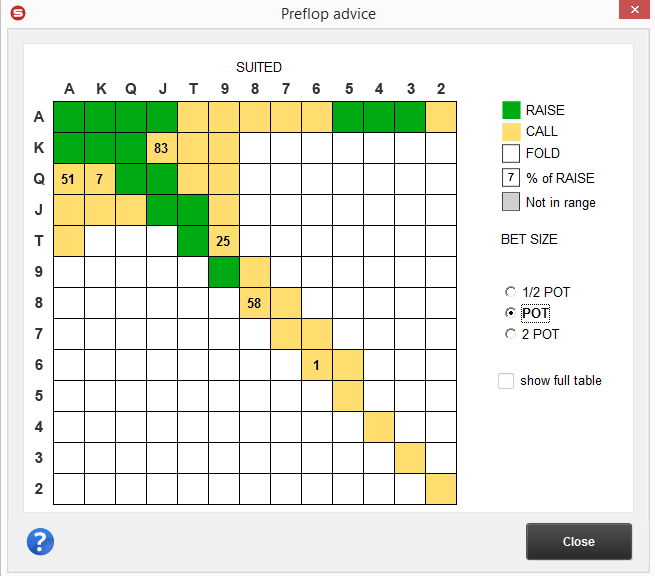 Card removal effects
The potential kicker trouble is indeed a disadvantage of those hands. However, the small suited aces offer some big advantages:
The last point is called card removal, and is quite an important concept that PokerSnowie has discovered by itself. With only two hole cards known, there is only very limited information about the opponent's hole cards. But let's examine how the information of 'one ace less in the deck' changes the response of your opponent.
If you hold, for example, JTs, you raise and the BB player folds, what is the response of the cutoff player? According to PokerSnowie, the cutoff player will play:
If instead of JTs you hold A3s, the probabilities for the individual holdings of your opponent change. The cutoff player will then play:
Having taken one ace out of the deck increases the immediate success from 28.5% to 33.0%, which is an increase by 16% (4.5% of 28.5%)! Additionally the unpleasant re-raise happens almost 3% less often, which is a decrease of 17% (2.9% of 16.8%). This is why the small suited aces are very good candidates for bluff-raising.
Summary
Like in the previous example (opening the pot), PokerSnowie was able to construct a very solid 3-bet range. It is well balanced with value and bluff raises, it takes into account how well the hands play post-flop and after another re-raise the resulting ranges are again reasonable.
Most interestingly, PokerSnowie was also able to learn the concept of card removal. This concept was not introduced by outside knowledge, it was just learned through experience. It is always impressive to see a computer program learning strategic concepts that many humans have never thought of. That is very promising for the rest of PokerSnowie's playing style and we'll discover some more tricks in the next articles.